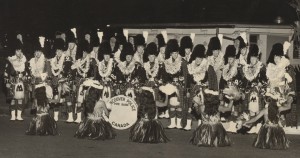 Aloha! This traditional Hawaiian phrase had become a common saying amongst the band members since their arrival to Honolulu in late November, 1963 for the Annual Aloha Festival. Every parade and every performance began and ended with a joyous ‘Aloha!’ from their gracious local hosts, and the Canadian guests were beginning to feel the love more and more with each passing of the phrase.

Ian Sinclair, a first year constable of the Vancouver Police Department and one of the newest members of the Vancouver Police Pipe Band at the time, was sitting in the lobby of the hotel awaiting the arrival of his fellow band members to start their day before the next performance, when he saw the news bulletin flash across the only television in the hotel. The entire lobby silenced as the news trickled in.

“It was a bit of a shock really, that something like this could happen.” ~ Cst. Ian Sinclair

When the bands liaison appeared at the hotel he failed deliver his usual happy ‘Aloha’. Instead, he told the anxious musicians that something terrible had happened and there would be no more performances that week. The band was heartbroken.

Pipe Sgt. Andy Perrie had been in the band for 12 years, and would go on to enjoy a 60 year career with the band, but had never encountered a morale drop like this.

“We were all pretty shook up and very sad. It sort of killed us all too.” ~ Pipe Sgt. Andy Perrie.

When the news finally confirmed the nations worst fears, the entire Aloha state was in despair. Pipe Major William Baird, sensing an opportunity to empathize, devised a plan that would allow the band to offer their condolences through music.

Black covers were procured for the drums.

A local USMC unit was contacted.

Within mere hours of the assassination, an impromptu full retreat ceremony had been conceived to honour the late President, John F. Kennedy.

That night the band gathered at the Waikiki Shell in Kapiolani Park to unveil their gift to the grieving Hawaiian people. As the pipes began to play more people started to gather, until the outdoor arena was filled with thousands of spectators. Joined by a special detachment from the United States Marine Corps, and wearing full highland regalia on the brisk Hawaiian night, the band performed their traditional retreat ceremony.

Despite the horrible news of that day, the band’s spontaneous gesture of sympathy won the crowd over. In fact, Governor John Burns was so moved by the bands performance, that he presented every member of the band with the Hawaiian Silver Star, the highest Hawaiian award available to civilians. These honours were struck especially for the band, with the proud King Kamehameha boldly emblazoned on the face of each medal.

As a result of this performance the band was to perform for President Lyndon Johnson on a visit to Vancouver in 1964.

Sorry, the comment form is closed at this time.